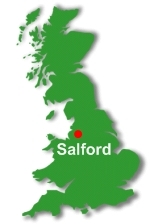 The inspectors carried out a two-week investigation of the authority's safeguarding service in May and concluded that "some child protection concerns are not being properly identified as such or responded to in an appropriate or timely manner leaving some children and young people at potential risk."

It is the second time in four years that the Council's safeguarding service has been found to be inadequate, leading to calls from Salford's opposition leaders for the council leader John Merry to quit.

In June 2009 a Serious Case Review into the death of a two-year-old girl, Demi Leigh Mahon, who was murdered by her schoolboy babysitter, was also damning about failures by the council, health professionals, and police in responding to the risk the child was exposed to.

Mr Merry has promised to take whatever action is necessary to improve their child protection service.

"I am not going to pretend the report is not critical and I am deeply concerned about the problems it outlines. We could and should be doing better in some absolutely key areas," Mr Merry said.

"We now have a new leadership team in place which is driving through the necessary improvements and I have asked for inspectors to come back in six months to ascertain what progress we have made."

During the inspection, Ofsted rated 33 different areas and found four were "good", 21 were "adequate" but eight were "inadequate", mostly in the safeguarding service.