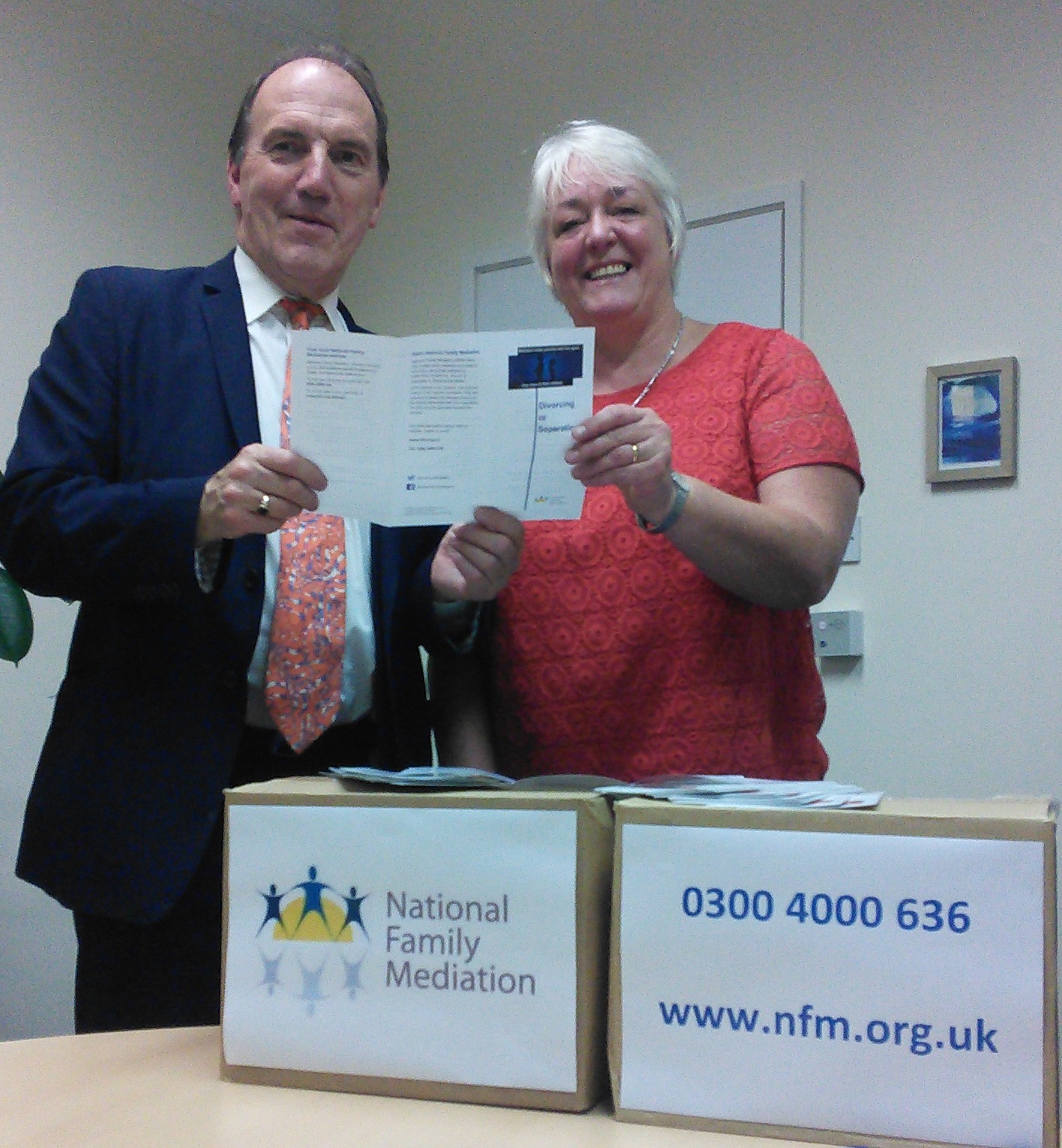 With a new government scheme to fund more free mediation sessions set to begin on 3 November, the Minister heard how NFM expects a further rise in demand for its family services.

Mr Hughes helped Chief Executive Jane Robey prepare some of the charity’s information leaflets for despatch to families to help them learn more about what family mediation can offer (see picture attached).

The new government scheme will fund a free mediation session for both people involved in a separation even if just one qualifies for legal aid.

'We expect demand for mediation services to further increase during November,' said Jane Robey. 'This new scheme can help thousands of people across England and Wales take a vital first step to unlock an understanding of what family mediation can achieve. Mediation puts families in control of their post-separation future instead of handing it over to clogged family courts. It’s a much quicker, less confrontational and a more cost effective way of settling family breakdown.'

'We know mediation works and we are committed to making sure more people use it rather than go through the confrontational and stressful experience of court. That is why we are funding single mediation sessions for both parties if one of them is already legally aided.

I was extremely pleased to visit NFM in Exeter and see and hear about the great work they do in helping separating couples resolve disputes about children or money. I was also delighted to hear that the number of people contacting their helpline has soared since we introduced compulsory mediation in April.'

The Minister also outlined plans to ensure children themselves are given a far greater role in shaping arrangements that affect their own future following a family breakdown.

'Too often post-divorce family arrangements pay scant attention to the needs of children themselves, especially where these arrangements are handed down by a court,” said Jane Robey. “This is one of the main reasons the first NFM mediators, over 30 years ago, developed the practice. We very much look forward to being involved in the Ministry of Justice’s future plans to promote child-inclusive mediationand having the opportunity to share our unique expertise in this area.'

During the afternoon visit (28 October) Mr Hughes met NFM mediators and staff who answer calls on the NFM telephone helpline, demand for which has soared during 2014. The 0300 4000 636 helpline has taken an average of 2,300 calls per month since April, when a change in the law made it compulsory for people who are seeking a post-separation court order to first attend a mediation awareness meeting.

'Separating people are often reluctant to pay for family mediation, especially so when they know the other person – their ex – is getting it for free. They rarely understand exactly what they will be paying for and, since mediation is usually an unknown quantity, they are unsure it will work.

Getting people into the mediation room with open minds can be amongst the biggest challenges. Confidence in a previously-unknown process usually blossoms as people begin to understand and accept the potential of family mediation to help them shape their family’s future in an affordable way and with agreements being reached in seven out of ten cases that is proof enough that mediation works.'

Over 60% of parents at court without a lawyer
12 OCT 2014
More support for separating couples and parents
Authors: Jonathan Cailes
23 OCT 2014

Over 60% of parents at court without a lawyer
12 OCT 2014
More support for separating couples and parents
Authors: Jonathan Cailes
23 OCT 2014