A day in the life of ... David Lister 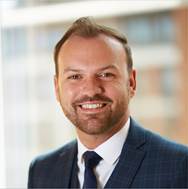 I am an Associate Solicitor and part of the Private Wealth team at Irwin Mitchell. I am also about to take over as the Chairman of the YRes National Committee, from August.

I conduct a lot of my own advocacy, which means that I am often away from my desk during the day. As gratifying as being at the coal face in Court can be, it can mean that most evenings are spent on the phone to or emailing clients. Thankfully, I have a very understanding family.

I supervise a number of junior members of my team and support them with their development alongside managing our national family law team’s social media accounts, which can be hard when there are 50 family lawyers to keep track of and when we are often in the press as a result of cases such as Hart, Roocroft, Sharland and Gohil, which attract a lot of attention.

Being part of a large national firm means that it doesn’t stop with family law. I am a champion of our Expert Hand, Human Touch campaign and I am presently leading a group of non-family colleagues as part of the firm’s 2022 growth plan. My team is tasked with researching and developing new methods of delivering legal services to clients and exploring what the needs of employees will be in the legal marketplace of the future. It’s a challenge, balancing it all, but one that I am relishing.

I have been working in family law for almost 10 years now. I wanted to be a lawyer from the age of 8 but I didn’t know that I was made for family law until much later. Many will know about my background and why that is the case. I worked a full-time job and two part-time jobs throughout my LLB and the LPC (both full-time courses). I secured a role as a family paralegal in 2009 before going on to join Irwin Mitchell in 2012, initially working for Ros Bever (now our National Head of Family) in Manchester. I went on to work for Martin Loxley (our then National Head of Family) in Sheffield. I recognised the potential for growth in Leeds and so I moved here in March 2017. We’ve seen considerable growth in just 12 months. It is an exciting time for the Leeds office as well as our national team. We have just had our best ever year.

Does GDPR permit me to say?

When I was a Trainee, my old firm was not accessible 24 hours like Irwin Mitchell is and we didn’t have Wi-Fi in my old flat. Amidst a five-day trial I had to use my old university library card to gain access to a copier and a printer so that I could prepare a number of documents overnight for a Judge. I was the only one in the library and the barrister (you know who you are!) was bombarding me with requests to amend, print and collate documents. I worked all through the night and eventually left the library at 7.30am in my shorts, vest, flip flops and a backwards baseball cap. The Court building was on my way home, so before I headed for a shower I thought it would be a good idea to check whether security would allow me to leave the papers in the Judge’s chambers. As obliging as they were, I do wish they hadn’t been because as I was leaving the Judge’s chambers I bumped into her, wearing effectively my pyjamas. As if that were not bad enough, when I returned to Court at 10am in my three-piece suit the Judge said, in front of everyone, how nice it was to see me with my clothes on…

I love taking the heat out of a situation. I’m not afraid of a fight but I know when to pick one. Many people want to fight fire with fire, but you can put out most fires with water. Identifying creative or practical solutions to a legal problem is what I find most rewarding.

I hate receiving long letters. I won’t be drawn into a trial by correspondence. If your letter is longer than two pages, you aren’t thinking about the content carefully enough.
Article continues below...

I always try to improve myself and improve the lives of those around me. Being better motives me. Not being better than anyone else. I just want to be better than the man or lawyer that I was yesterday. If I can see that I have had a positive impact on a client, a colleague or a case, I know that I am doing what I set out to. That makes me feel good.

I had to switch to decaf in January after my GP advised that I was suffering from caffeine withdrawal. I mistook it for anxiety. I am glad it wasn’t something so serious.

Learn to listen, be honest and don’t be afraid to roll up your sleeves and muck in. When a person’s family is falling apart or they are faced with losing their children or assets that they have worked hard for, they don’t just need a lawyer. They need a shield, a springboard and a safety net; someone that they can count on, that will make them feel protected and give them the confidence that they need to move forward. Be real. You can’t fake it.

At the moment I have Paloma Faith’s version of Make Your Own Kind of Music on in my car. The lyrics just hit me when I heard them. I spent a large part of my early childhood struggling to fit in. The moment I let go of my own hang ups, I made friends and went on to achieve. I am a real believer in people dancing to their own tune. Life would be so dull if we were all the same.

I am a huge champion of women as I have three sisters and was raised by a single mother with support from my grandparents. Listening to Brenda Hale speak at the Resolution Conference was a real privilege. The image of her leaving behind her a whole series of smashed glass ceilings filled me with admiration and confidence for the next generation of family lawyers, women and men alike.

As Jo Edwards forgot to give a nod to Mandy in Listing in her Q&A, I suppose I had better give her a mention. I’m waiting for a date for a trial and I’m hoping she might read this and help me out.

I wish I had more time to visit my grandparents. I love nothing more than to help my grandfather pot plants in his greenhouse and I would walk over hot coals for one of my grandmother’s Yorkshire puddings. I also have three nephews under the age of 5. We will often go hunting for dragons, unicorns and wizards. We usually find slugs.

The Next Home catalogue. Pure escapism.

I recently read a fantastic book called The Life Changing Magic of Not Giving a F**k, by Sarah Knight. The one thing that I took from it is the habit of having a F**k budget. The whole philosophy behind it is controlling what you care about and, most importantly, what you don’t. I spent a large part of my early career worrying about more than I needed to. Whilst the book didn’t teach me anything I didn’t already know, it did reaffirm the values that I had established as I was moving into my thirties. I no longer sweat the small stuff.

As I am about to buy my first restaurant, I suppose I would have to say restaurateur. Although, I would have loved to have been an interior designer. I enjoy being creative. Art was my favourite subject in school. Give me a piece of charcoal and an easel and I’ll entertain myself for hours. I am forever being sent colour charts by friends asking me which colour they ought to paint their kitchen. I might start charging them!

I would like families to be given the time and quality of representation that they need and deserve. I don’t blame the Judges, the self-represented parties or the lawyers. They work tirelessly and do the best with what limited resources and funding options they have. Aside from death, family breakdown is usually the most grief-stricken period that a person will experience in their lifetime. Having to go through that alone, or to feel as though they are not being given a fair chance, be that because of delays, a lack of professional resources or time constraints must be soul-destroying.

What has winning the Family Law Award meant to you?

It made my grandfather even more proud of me and I now wear a crown in the office. My award sits on my desk at home. I have to confess, after the awards had finished last year I took it to a club with me and I dropped it. It now has a small dent in it. I celebrated hard that night. It meant the world to me to be recognised on a national stage alongside some of the best in the business. There are plenty of other awards out there, but to be nominated by those that work in the same field as you is the best kind of compliment. I shall always be thankful to those that nominated and voted for me.
Nominations close for the Family Law Awards 2018 at midday, Friday 15 June.