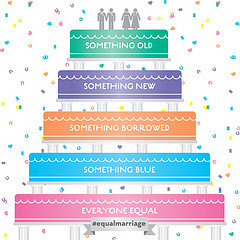 The Marriage (Same Sex Couples) Bill completed its journey through Parliament by receiving Royal Assent on Wednesday, officially making it law. The first same sex wedding could take place by as early as summer 2014.

The Act will also enable civil partners to convert their partnership to a marriage and would enable married transsexual people to gain legal recognition in their acquired gender without having to end their marriage. However this will follow later than summer 2014 as it will take government departments longer to implement all the necessary processes.

Ben Summerskill, chief executive of gay rights group Stonewall said: ‘Royal Assent sets the final seal on this modest and decent law which will bring joy to tens of thousands of gay couples and their friends and families. We'll be working closely with officials over the coming months to make sure that the law is implemented without delay and that the first weddings can take place next January.'