View from the foot of the Tower: Elephants and Barbara Streisand 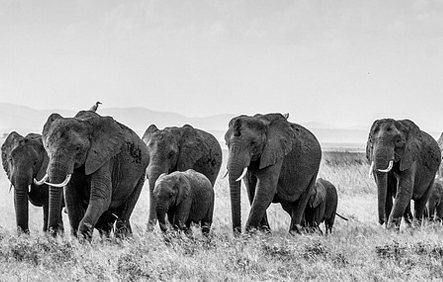 Andrew Pack
Care Lawyer
In 2003, Barbara Streisand wanted to stop publication of photographs of her Malibu residence and sent off some letters from her attorneys threatening dire consequences for anyone who published them. Unfortunately for her, the story changed from 'Rich famous woman owns nice house - have a look at it'  to 'Rich famous woman tries to silence free speech' and as a result, far more people ended up looking at the Malibu home than ever would have done if the story had run unhindered.

Ever since then, the Streisand Effect has been a term used for when an attempt to silence a story ends up bringing the very thing you were trying to keep quiet to the attention of many more people than if you had just let it go.   (It may be fortunate for a particular Welsh footballer that there was already a name for this phenomenon, when the ‘superinjunction' furore finally came to a head.)
What has this got to do with family law? Or indeed elephants?

Well, the elephant in the room relating to the current position in law, following Re J (Reporting Restriction: Internet: Video) [2013] EWHC 2694 (Fam), [2014] 1 FLR (forthcoming), the President's guidance on Transparency in the Family Courts, Re P [2013] EWHC 4037 (Fam) (13 December 2013) and the Practice Direction about committal hearings is that trying to keep the identity of a child who has been the subject of care proceedings confidential may ultimately be very difficult.

The local authority in Re J, of course, ran inadvertently headlong into the Streisand Effect. In trying to take down some material from YouTube and some campaigning websites that relatively small numbers of the general population would have seen, that material went onto the front page of the Daily Mail and was seen by exponentially more people. The child's name was kept confidential, but the more people who saw the material, the greater the chance that one of them would know who the parents and child were.

These are the four key things to be derived from the above decisions / guidance.

(1) It is not sufficient that a story be inaccurate, lurid or tendentious to prevent its publication - providing that the story does not identify directly or indirectly the child who was the subject of proceedings, it is likely to be difficult to obtain a Reporting Restriction Order (RRO).

(2) From February 2014, anonymised judgments in most care cases decided by circuit judges or above will be published and available online, and the protective element is that the child's identity will usually be kept anonymous by the rubric  (save in exceptional cases where the judge decides that anonymity is not required, for example as happened with the Webster family).  RROs and deprivation of liberty cases (ie secures and committals) will be in the category of judgments that will ordinarily be published.

(3) The Court is not terribly concerned with shutting the barn door after the horse has bolted - for example in Re P, given that the mother's maiden name was already in the public domain there was no value in having this particular aspect prohibited within the RRO.

(4) Committal hearings for contempt are generally to be held in open court (meaning that anyone can attend and report on them) and where it is to be heard in private, it is mandatory if contempt is found for the court to state in public:
(a) the name of that person;

(c) the punishment being imposed.
Thus, if a parent, or relative makes public the identity of the anonymised parents or the child in an anonymised judgment, the only two options for a local authority wishing to protect the privacy of the child are:

(1) apply for a RRO (unlikely to be given, save for ‘not directly or indirectly identifying the child who was the subject of court proceedings');

(2) apply for committal of the parent for breach of the rubric, or any such RRO.
The elephant is starting to come out from behind the curtains and take shape.
If the local authority are driven, by breaches of the rubric or RRO, to contemplate a committal for contempt allegation, a little pondering will show the potential Streisand Effect of such an application.

(1) The application for committal is likely to be heard in open court, and at the very least, a judgment published identifying the person's name and the general nature of the breach.

(2) It is likely, in the current and foreseeable climate, to be newsworthy that a parent is sent to prison - or that a local authority attempts to send a parent to prison - for ‘speaking out about the family Courts'.

(3) Those newspaper reports can freely name the parent, which of course directly identifies the child who was the subject of proceedings.

(4) In attempting to preserve the child's anonymity and privacy, the committal application has the opposite effect of bringing the child further into the spotlight and media glare.

(5) It is likely that the longer the sentence that is handed out, the more newsworthy the case becomes.
Leaving the protection of the child's identity and privacy in the hands of a largely hollow threat. A parent breaching the court's decision that the child should not be identified will only face consequences if the local authority apply for committal, and the committal application has the very real risk that the publicity about the child will grow exponentially. In real terms, will an application for committal for leaking the child's name ever have any value in stopping the wider circulation of it?

Of course, newspapers will not publish a parent's account and name the child or the parents UNTIL that information is in the public domain (just as newspapers did not breach the super-injunctions about the Welsh footballer, but were very swift to report the name once it had been exposed under Parliamentary privilege).

In the modern era, however, a parent does not need a newspaper willing to breach the rubric to disseminate their message. Any person with a computer, or even a library card, can start a blog, or a Facebook page or a Twitter account. There are campaigning websites, some situated overseas, who may be willing to share the parents' story. Any reader of the story has their own ability to forward it, to retweet it, to favourite it, to increase the circulation of it.

Once the story is out there, it isn't difficult for the press to run a mainstream account, not identifying the name of the child, but using the details of the case that they are given by a parent and can read in the anonymised judgment. From there, any sufficiently interested reader of the newspaper article will fairly swiftly be able to find the online accounts that do not conceal the identity of the child.

Even that, troubling as it might be, is better than the possible consequence for the child and the local authority of a committal application, which will permit the press to name the person who was the subject of it and to report on the local authority ‘Attempting to gag' the parent and send them to prison. That turns the identification of the child from ‘anyone who puts in an effort can find it out' to ‘anyone who reads a newspaper or watches the One Show will see it'.

An important consideration for any local authority contemplating a committal application against that backdrop becomes not merely 'Can we prove the breach' but has to include  'Is this application going to be counter-productive for the child?'

Practice Guidance of 3 May 2013: Committal for Contempt of Court
Authors: Jonathan Cailes
3 MAY 2013
CARE PROCEEDINGS/PUBLICITY: Re J (Reporting Restriction: Internet publication of Images of Child) [2013] EWHC 2694 (Fam)
Authors: Samantha Bangham
6 SEP 2013
J is for Jurisdiction: Re J
11 DEC 2013
Practice Guidances of 16 January 2014 on Publication of Judgments: Transparency in the Family Courts and in the Court of Protection
Authors: Jonathan Cailes
16 JAN 2014

Practice Guidance of 3 May 2013: Committal for Contempt of Court
Authors: Jonathan Cailes
3 MAY 2013
CARE PROCEEDINGS/PUBLICITY: Re J (Reporting Restriction: Internet publication of Images of Child) [2013] EWHC 2694 (Fam)
Authors: Samantha Bangham
6 SEP 2013
J is for Jurisdiction: Re J
11 DEC 2013
Practice Guidances of 16 January 2014 on Publication of Judgments: Transparency in the Family Courts and in the Court of Protection
Authors: Jonathan Cailes
16 JAN 2014