This lawyer's life: Wish me Happy Christmas, dammit! - or (for goodness sake!) 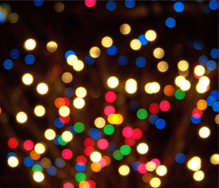 A friend recently wished me 'A happy end of the year.'

Since I don't normally get wishes for, say, the end of April or September, what could be happening at the end of December??

Ah, the 'C' word that in some quarters no longer dare speak its name. My friend, white, nominally Christian, politically correct to the core of her soul had to tussle with her conscience to find a greeting that wouldn't make either of us spontaneously combust. So, 'end of the year' it was.

I'm from an ethnic minority, you see and everyone knows ethnics are offended by Christmas. The mere sight of a strand of tinsel or the lame lights display down the local high street destabilises us. It reminds us that we live in a hostile land where on December 25 the natives indulge in rituals we cannot understand. Gathering around the sacred telly bloated from stuffing themselves silly, worshipping Morecambe and Wise reruns and passing round a family size tin of Quality Street are customs so alien to us (even if we've been born and raised here) that we simply cannot cope.

So, like all good pantomime villains, we want to destroy what we can't have. In short we demand that Christmas be cancelled.

Over the years newspapers have run campaigns to 'Name and shame the Christmas kill joys'. Councils that rename Christmas lights mere 'winter lights', schools that ban nativity plays have felt the full of wrath of sections of the press.

The Sun even created the Crimbo (a sort of Asbo) to slap on wrongdoers.

The culprits are mostly those for whom comrade Castro was something of a neo-Nazi but the blame for killing off Christmas has always inevitably fallen upon the ethnic minorities in whose name they claim to act.

Each year Exasperated callers on radio phone-ins wail: 'Is there anything that doesn't offend these people?'

For 'these people' then, read anyone a shade darker than Marcel Marceau in white-face mode.

Not one such person I know has ever admitted to being unduly distressed by the sight of an advent calendar or a fat, bearded bloke in a fur-trimmed suit. Almost all say they love Christmas.

What's not to love? Large, sozzled strangers falling on you on trains, vomit from one too many mince pies at bus stops, prices being triple hiked on stuff in the shops because it com in a 'festive' box, being wickedly propositioned by drunk colleagues you never knew had it in them...

I jest. I too love Christmas. Even if it means back to back contested hearings, ICO removal hearings until 8pm, rail strikes, telling clerks - through clenched teeth - that it really is not possible to get from a morning hearing in Worthing to a 2pm listing in Newcastle even if the 10am listing 'should be a quick in and out directions hearing,' being wickedly propositioned...

Anyway, moving swiftly on. Christmas, for all the stresses it brings can still be the best, most magical time of the year.

I wish each and everyone of you an unadulterated Happy Christmas and a fantastic New Year.

And because you've all been very good lawyers this year I'm going to give you the gift of a television recommendation. On 29th December the BBC will air a film called To Walk Invisible, the story of the three genius sisters of Haworth, the Brontes.

Sir Mark's aim in this book is to be...
£20.99
View product
Categories:
Articles