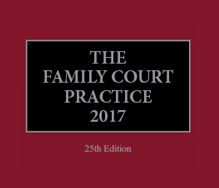 Jonathan Cailes
Senior Editor
2017 marks the 25th edition of The Family Court Practice (the Red Book), with the first edition having been published in 1993, at a time when the legal landscape was very different.

When the first edition landed on subscribers’ desks, practitioners were already becoming familiar with the Children Act 1989 but the Family Proceedings Rules 1991 were only beginning to bed in, commenced as they were on 14 October 1991.

The Family Court Practice was conceived as an essential, comprehensive and definitive work covering, in a single volume, the entire range of family proceedings at every level of court. The content and structure of the book was designed to provide step-by-step guidance to help practitioners navigate the procedural complexities of family law. All of this took place under the expert hand of the General Editor, Anthony Cleary. In many ways, nothing has changed and the ‘work is now universally accepted as a standard book of reference for judges and practitioners throughout the jurisdiction’ (The late Hon Mrs Justice Bracewell).

However, since 1993, the Civil Procedure Rules 1998 have been introduced and the Family Procedure Rules 2010 (including a raft of essential Practice Directions) replaced the Family Proceedings Rules 1991, which had a considerable impact. Yet, these changes are arguably outshone by the introduction of the single Family Court in 2014. The Introduction to the 1993 edition began by considering the concept of a ‘family court’ and its eventual appearance on 22 April 2014 made the name of The Family Court Practice all the more pertinent.

There have, of course, also been huge changes to family life since 1993 with the rise of surrogacy, alternative families, civil partnership and same-sex marriage, to name but a few. Reflecting the rise in the complexity of family proceedings, the page extent of the Red Book has grown considerably between 1993 and 2017. The 1993 edition boasted an impressive 1773 pages, but the 2017 edition has expanded to a monumental 2982 pages, despite a number of typesetting changes that allow even more practical advice to be crammed onto each page.

The Family Court Practice Online was launched in 2004 to provide the text of the print version in a searchable and easily accessible format, with links to the unrivalled Family Law Reports (FLR). In 2016, The Family Court Practice was made available as part of the LexisNexis online platform, LexisLibrary, and among other benefits is the ability to access the fully consolidated legislation in LexisLibrary via links, plus an enhanced search functionality.

Since 2010, the Red Book has been complemented by the Autumn Supplement, which provides readers with a detailed round-up of the developments in family law since the publication of the main work. As of 2016, the Autumn Supplement also provides coverage of Welsh legislation in regard to children. The online service has also been enhanced to provide this same Welsh coverage, with the addition of the relevant Codes of Practice to the Social Services and Well-being (Wales) Act 2014.

The Red Book has gone from strength to strength since 1993 and has become the seminal work for all who practise in the Family Court.

‘Indispensable. It is the single book that every family practitioner and every family judge must have’ (Sir James Munby)

Click here to read more, to order your copy of The Family Court Practice 2017 or to request a FREE online trial.