Part 1: the immediate implications of a no-deal Brexit for cross-border children’s cases 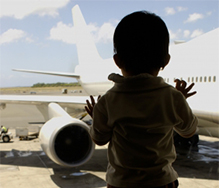 In this new 2-part series, Maria Wright, a solicitor and PhD candidate at the University of Bristol, looks at the immediate implications of a no-deal Brexit for cross-border children's cases. Today part 1.

Brexit is inevitably going to bring about the loss of Brussels IIa [1], an instrument of private international law which plays a vital role in cross-border children’s cases.

Brussels IIa serves three core functions within the EU. It lays down jurisdictional rules, prescribing which Member State is competent to make decisions about a child. It provides a regime for mutual recognition and enforcement, so that court decisions concerning children can be effective in any EU Member State. Finally, Brussels IIa lays down a system of cross-border co-operation and communication between Central Authorities, which supports these functions and permits the sharing of information in relation to children involved in court proceedings.

There is another, similar, instrument which performs these functions which does not emanate from the EU; the 1996 Hague Child Protection Convention.[1] All EU Member States, and many states outside the EU, are also Contracting States to the 1996 Hague Convention.

The government’s position was, until recently, that it wasn’t enough for the UK to ‘fall back’ on the 1996 Hague Convention after Brexit, an instrument which many regard as inferior to Brussels IIa. In 2017, the government said that it wanted to create ‘a new relationship based on mutually beneficial rules and processes to facilitate and enable cross-border trade, commerce and family life’.[2] This was a vague aspiration, lacking in detail as to how such a new relationship would be formed and governed.[3]

However, with the possibility of a ‘no deal’ Brexit looking more likely, it seems that it will not be possible to conduct this kind of bespoke legal framework with the EU 27. What’s more, ‘crashing out’ of the EU in the event of no-deal would mean that there are not comprehensive transitional arrangements for cases that were issued before 29 March 2019.

Crashing out without a crash mat will in my view have some significant implications for children’s cases with a cross-border element. My research examines the operation of private international law in a child protection context, an area where law provides an imperfect supporting framework for the practical working cases. I suggest that these cases will be further complicated, and potentially frustrated, by an abrupt exit from the European Union. I have given references to support my analysis, but of course others, and indeed courts, may interpret things differently and (I hope) in a manner which lessens any detrimental impact upon children involved in cross-border cases.


Pending cases might be affected
You might assume that if you have a European cross-border case which started before 29 March 2019, it will continue to be governed by Brussels IIa after a no-deal Brexit, under some kind of transitional arrangement. However, that is not necessarily the case.

The government has produced a statutory instrument to deal with jurisdiction in family cases after a no-deal Brexit. The draft Jurisdiction and Judgments (Family) (Amendment etc.) (EU Exit) Regulations 2019 will come into force on exit day, if there is no deal. It will repeal Brussels IIa in its entirety.[4]

As to transitional arrangements, the statutory instrument says that Brussels IIa will continue to apply to;

‘proceedings before a court in a Member State seised before exit day in reliance upon… the provisions of Chapter II jurisdiction of (Brussels IIa).[5]

Chapter II of Brussels IIa is the part of the Regulation which deals with jurisdiction. To an extent, the draft statutory instrument is consistent with the European Commission’s Notice to Stakeholders which says that EU Rules for international jurisdiction will continue to apply to proceedings initiated before exit day.[6]

I interpret this as meaning that if you issue proceedings before 29 March 2019, the jurisdictional rules in Brussels IIa will continue to apply to your proceedings after exit day.

So, for example, if you have jurisdiction in your proceedings on the basis of Article 8 Brussels IIa (habitual residence), you can transfer that jurisdiction to another Member State under Article 15 Brussels IIa even after exit day.

However, limiting the transitional arrangements to Chapter II Brussels IIa (jurisdiction), to the exclusion of the rest of the Regulation, has some potentially problematic implications for cases issued before 29 March 2019, which are continuing after exit day.

Below are some examples;

·       It might lead to pending cases becoming segmented on exit day. Brussels IIa would continue to govern the jurisdictional basis of the case, but the 1996 Hague Convention would govern the recognition and enforcement of any orders made and would also be the applicable instrument for any cross-border co-operation required after exit day.

·       Some chapters of Brussels IIa are inextricably linked to each other. For example, Article 11 (8) Brussels IIa falls within the jurisdiction chapter (Chapter II). This article permits an applicant to have a ‘second bite at the cherry’ and secure the return of an abducted child to the state of the child’s habitual residence, even after an order for the non-return of the child has been made under the 1980 Hague Convention Article 13. However, the enforcement of a return order made under Article 11 (8) is governed by Chapter III of Brussels IIa.[7] So an applicant could issue proceedings under Brussels IIa before 29 March 2019, be successful in securing their child’s return under Article 11 (8) Brussels IIa, but then be unable to use the Regulation to directly enforce that return order in the relevant Member State.

Recognition and Enforcement could be tricky
As eluded to above, it would seem that in the event of a no-deal Brexit, applicants cannot avail themselves of the recognition and enforcement provisions of Brussels IIa after 29 March 2019 even if the order that they want to recognise / enforce was made before exit day.

There is a caveat to this. Most orders concerning matters of parental responsibility must go through the exequatur procedure before they can be enforced in another Member State.

This means that an applicant must obtain a declaration of enforceability (or registration for enforcement, as it is referred to in the UK) before the order can be enforced.[8] If an applicant has already got this declaration of enforceability before exit day, they can still use the enforcement provisions of Brussels IIa to actually enforce their order.[9] They might have to rush to get this before exit day, if they want to use Brussels IIa for the enforcement stage of their case.

Some orders don’t need to go through the exequatur procedure if they have an appropriate certificate attached to them. Contact orders, and orders for the return of a child made under Brussels IIa Article 11 (8) (see above) can be directly enforced.[10] However, even if an applicant has a contact order or a return order, made before 29 March 2019, they won’t be able to make use these advantageous provisions and directly enforce their order in the EU 27.

The 1996 Hague Convention does have similar scheme to Brussels IIa for recognition and enforcement which can be used after Brexit. Tomorrow part 2.

[1] Convention of 19 October 1996 on Jurisdiction, Applicable Law, Recognition, Enforcement and Co-operation in Respect of Parental Responsibility and Measures for the Protection of Children

[6] European Commission, ‘Notice to Stakeholders: Withdrawal of the United Kingdom and EU Rules in the Field of Civil Justice and Private International Law’ 18 January 2019, https://ec.europa.eu/info/sites/info/files/notice_to_stakeholders_brexit_civil_justice_rev1_final.pdf

[9] European Commission, ‘Notice to Stakeholders: Withdrawal of the United Kingdom and EU Rules in the Field of Civil Justice and Private International Law’ 18 January 2019, https://ec.europa.eu/info/sites/info/files/notice_to_stakeholders_brexit_civil_justice_rev1_final.pdf Para 2.1