Rocky start to the Court of Protection 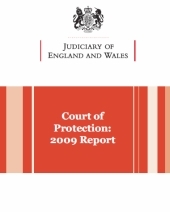 The Court of Protection has published its first report since it was set up in October 2007 which reveals that it has suffered a number of setbacks that have led to long delays in dealing with applications.

The Court of Protection is a specialist court created under the Mental Capacity Act 2005 and is responsible for making decisions for people who lack the capacity to do this for themselves, and also for appointing deputies to act on their behalves. In 2007 it replaced the previous court with the same name, which exercised judicial functions under the Mental Health Act 1983 and the Enduring Powers of Attorney Act 1985.

From October 2007 to the end of December 2009, 1,672 complaints were made about the court, almost a third of which were about the length of the process and delays.

In the forward to the report, Senior Judge Denzil Lush, formerly Master of the Court of Protection, accepts that the court failed to anticipate, prior to the implementation of the Act, the volume of work that would inundate the court during the initial transitional period, and the overall burden it would place on the judges and staff. In addition the report reveals that there were insufficient judges in the court's central registry at Archway Tower to be able to cope with this demand.

Throughout the period covered by the report there were only four full-time judges, when the need was for six. The position was exacerbated by the long-term sickness of one of the District Judges, which reduced the active complement to three. However, three new District Judges were appointed to Archway and took up their posts in April 2010.

There has also been criticism in the press of the court being too secretive as hearings are held in private. However, the report indicates that the court has no intention to change the principle that in cases dealing with the private affairs of persons lacking mental capacity, "the parties are entitled to expect and are best served by privacy".

Over 40% of court users are applicants who have no professional support, which may account for the large number of complaints about the decision-making process being difficult to understand and the court's procedures being too bureaucratic and time-consuming.

To address this issue, the President announced at the end of 2009 that he was setting up a committee to undertake a review of the Court of Protection Rules 2007 and the practice directions and forms which accompany the Rules. The committee is expected to report its recommendations in the coming weeks, with new rules and procedures to follow.