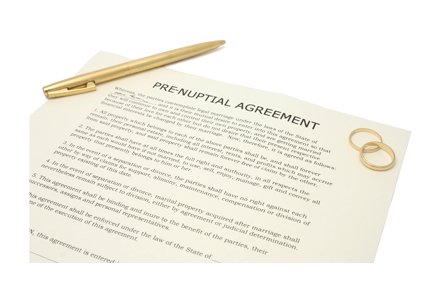 There's been a sea-change, of course, since Radmacher. Gone are the days when we'd start our advice with ‘Well, there's no harm in giving it a go but…’. Now we're all checking our insurance policies anxiously and remembering that aspirational young blonde from 2007 who agreed to walk away with nothing in the unlikely event that she and the love of her life (a 76-year-old billionaire, as it happens) should ever come unstuck. ‘Don't worry’, we'd advised her, ‘the Court may read it, but it isn't going to make a lot of difference to the approach. It will want to see an outcome not a million miles from the decision it would have reached anyway…’. Oh dear.

There'd been rumblings, such as the Susan Sangster case in 2008 but Radmacher was still a complete shift in the tectonic plates. To begin with, we wondered if it was too fact specific to be that important. Was it because they weren't British? Had pre-nups launched themselves across the

But the courts began to uphold some pre-nups in a way that they simply hadn't done before Radmacher. And now the Law Commission has suggested some qualifying ‘rules’ that, if adopted, would make the pre-nup binding for the first time ever. We all know nothing will happen this side of the election in terms of legislation, but we're on the way.

So what happens if your clients can't face putting themselves and their beloved through the unromantic negotiations that accompany pre-nuptial agreements? Well, there's always the chance of reintroducing the whole difficult business when the wedding's over, the presents have been gratefully acknowledged, and the first family Christmas looms. With a post-nup.

First, a quick bit of revision. Their initial purpose was to deal with a situation where the couple did not want to stay together but, gosh, it was only 1857 and much too early to think of divorce unless you were a middle ranking aristocrat at least. This was a way of securing some independence and financial security for an otherwise impecunious wife so everyone could live happily ever after. Apart.

No one thought very much about them in their modern incarnation until the Privy Council decision in MacLeod in 2009. Their lordships came to the view then that s 35 of the Matrimonial Causes Act 1973 was capable of creating, in effect, binding post-nuptial settlements for a couple who, whether deliriously happy still or going through a rough patch, wanted to create some legal certainty in the event that one of the inevitable bumps in the road turned out to be fatal.

For a year or so, post-nups were more popular than pre-nups. That is, until Radmacher poured cold water on MacLeod well as on Mr Nicolas Granatino, and gave pre-nups greater credibility. Now both are available to us as practitioners.

Of course post-nups are entirely different from pre-nups because, once married, rights have already been acquired. Personally I'm surprised that more is not made of the levels of duress that can be brought to bear when a couple whose relationship is (probably) in difficulty come to negotiate the terms of their post-nup behind closed doors. ‘I'll leave if you don't sign this’ or, worse, ‘I'll ignore you/bully you/hit the children if you don't sign this’, carries more pressure than, ‘We'll have to return the wedding presents’, ‘cancel the church’ and ‘feel rather embarrassed’. At least, that's my belief although the courts, and Law Commission, seem more exercised about the time lag between the pre-nup and the date of the wedding. Clearly, it's not ideal to wait until the last minute and then spring a pre-nup on someone you love enough to want to marry. However, post-nups carry a much greater level of hidden pressure.

Meanwhile, pre-nups, as we understand them in this jurisdiction, often contain clauses that undermine the whole wedding ceremony. On a rainy Wednesday in April, the couple choose to enter into a contract in front of their lawyers that excludes, for example, all their worldly goods. On a sunny Saturday in July, there they are in front of their friends and relations, sometimes even their lawyers, making different promises that explicitly contradict the ones in the pre-nup. ‘With all my wordly goods I thee endow…’ may be a difficult promise to make with a straight face.

So here's a radical proposal. Post-nups should be banned and couples with pre-nups should amend their vows to avoid lying to each other before their life's journey has even begun.