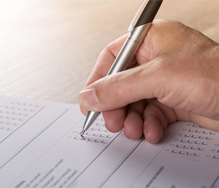 Judges surveyed about their jobs

In 2014, a questionnaire was sent to all salaried judges about their jobs and working conditions, to assist the Senior Salaries Review Body (SSRB). The SSRB makes annual recommendations to the Government on pay for senior positions in public service including judges, the military and the Civil Service including comparisons across the public and private sector. It considered a questionnaire a sensible way to gather evidence, as many other professions do.

The SSRB asked for a similar exercise in 2016, so a second survey was completed on behalf of the judiciary by University College London (UCL). It is published on the Judiciary’s website and includes an executive summary on pages 3–5.

'The quality of the judiciary underpins the rule of law and the continued success of our legal services market nationally and internationally. We are therefore extremely grateful to those who took part in the survey, which assists the SSRB in making evidence-based recommendations to Government on judicial pay. In the light of the substantially greater remuneration available to the most able practitioners in private practice, these matters are vital to our ability to attract candidates and retain judges of the highest calibre.'