In anticipation of a temporary blip: Would a change in the divorce law increase the divorce rate? 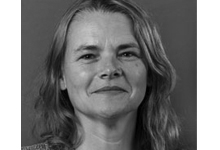 The second reading of MP Richard Bacon’s No Fault Divorce Bill is expected on the 4th of December. Despite its name, it is not a hugely revolutionary Bill. It doesn’t propose to abolish divorce based on fault. Instead it aims to add a sixth reason or ‘fact’ on which a divorce can be granted. Thus, if a couple both agree, they will be able to divorce after a one year cooling off period. This is in addition to the two existing ‘no-fault’ facts of two years separation with the consent of the respondent to divorce or five years without their consent. The three ‘fault’ based facts of behaviour, adultery or desertion would remain.

At this stage it is not clear whether the Bacon Bill will command much parliamentary support. Yet, whilst the proposed change is relatively modest, some voices have already raised concern that any move further towards no-fault divorce might encourage more divorces. At first reading Sir Edward Leigh stated, 'We know that the preponderance of evidence suggests that we will end up having more divorces and a higher divorce rate if no fault divorce is brought in'. The only evidence that he drew upon, however, is a single 2006 paper by Canadian economist Douglas Allen about same-sex marriage.

So what is the 'preponderance of evidence'? Does the research show that changing the ground for divorce, especially to no-fault divorce, lead to an increase in the rate of divorce?

The answer is not at all straightforward and does not, in my view, or those of most international researchers, amount to a 'preponderance of evidence'. Some of the earlier studies from the USA and Europe did indeed suggest that divorce law reform, especially no-fault and unilateral divorce, might raise divorce rates. However, there are now multiple studies, especially more recent studies, finding no effects or only temporary effects. Indeed those earlier studies have been subject to serious methodological criticisms on three main counts:

Looking at the research as a whole then there is little consensus that no-fault or unilateral divorce have had any clear impact at all on the propensity to divorce, though it is common to find short-term blips in response to policy changes.

But probably the best predictor of what might happen if the English law were to be amended comes from north of the border. Until 2006 Scottish divorce law was almost identical to that of England and Wales, with the same formulation of a single ground for divorce – irretrievable breakdown of the marriage – evidenced by one of five facts. However, the Family Law (Scotland) Act 2006 reduced the separation periods from two years to one where there was consent and from five to two years where the respondent opposed the divorce. The rarely-used ‘desertion’ fact was also removed.

So what happened when one year separation was introduced? Did the divorce rate shoot up in Scotland?

In fact, the result was a classic but short-lived mini-spike in the Scottish divorce rate immediately after the implementation of the 2006 reforms. Within two years, as the chart below shows, the divorce rate reverted to the previous level, and has continued on a slight downward trend. (It’s worth noting, by the way, that the Scottish marriage rate is also on a slight downward trajectory). 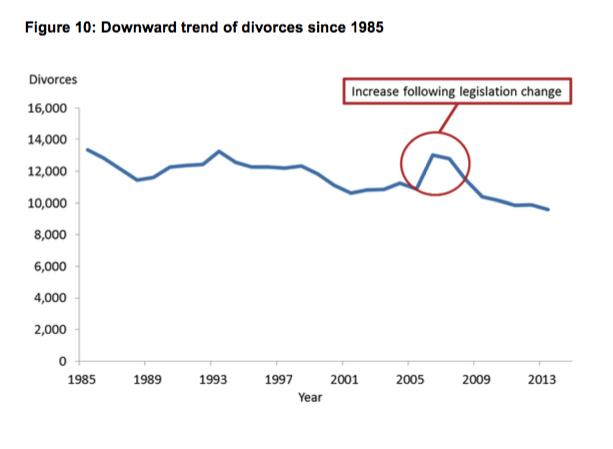 Source: Scottish Government (2015) Civil Justice Statistics in Scotland 2013-14 at p32-3. Annotation is in the original.

While the long-term divorce rate was unaffected, the reforms did have some impact in terms of reducing reliance on fault, from 19% to 6% of divorces (see table below). We do not have any detailed research, but the likelihood is that the availability of shorter separation periods has meant that fewer couples have had to resort to fault to achieve a divorce within the timescale they need.

*Excluding desertion at 0.3% of divorces.

**Total of divorces where fact was known. Excludes ‘other’ and gender recognition cases.

Figures calculated from Civil Judicial Statistics Scotland 2002, Divorces and Dissolutions in Scotland 2009-10 and 2013-14. Figures are not available publicly for 2003-8.

Whether or not a one-year waiting period would have the same impact on reducing the use of fault in England and Wales is a little harder to predict. It is worth pointing out that the post-2006 Scottish reduction in the use of fault is from an already low base compared to England and Wales where 62% of divorces proceed on the basis of fault currently. We can assume that gap is not based on wild differences in marital behaviour north and south of the border. It is more likely that the selection of fact is at least partly shaped by whether or not it will make the divorce process easier and quicker. In Scotland the increase in separation-based petitions followed the introduction of a quick and cheap ‘simplified procedure’ in 1982. The simplified procedure has only been available for those divorcing on the two separation grounds, not those using fault. In contrast, the quickest route to divorce in England remains behaviour or adultery petitions, hence their popularity.

There are still some puzzles about what drives the behaviour of divorcing couples. A quarter of Scottish couples do now chose the one year separation by consent route, suggesting that the Bacon’s proposal could speak to a relatively sizeable constituency. One puzzle though is why there has been an increase in the use of the ‘non-consensual’ two year separation post-reform in Scotland. The table above shows that pre-reform 54% of divorces were based on two years separation with consent; post-reform 66-68% of divorces have been based on two years separationwithout consent. In other words, fairly large numbers of ‘two year’ couples have switched from agreeing their divorce to now being in apparent conflict. It is hard to imagine that the reforms have suddenly sparked greater disagreement between divorcing couples about the principle of divorce. What seems more likely is that what is often called ‘consent’, whether pre- or post-reform, is not really about genuine agreement but more about tactics or perceptions of the least worst alternative.

So, what might be the lessons of all this for England and Wales? The international research, and especially the recent experience of our closest legal and geographical neighbour, would not suggest that a one-year waiting period would result in any long-term increase in the divorce rate. There could well be a short-lived (and modest) spike as some two-year separation petitions (currently 25% of the total) are brought forward by a year. But the Scottish experience would suggest that the effect would be short-lived. Those accelerated petitions could, in any case, be easily cancelled out by couples switching from quick fault-based to slightly slower one-year notice period petitions. Nobody wishes to see an increase in divorce but the lessons from research suggest that this would be unlikely to happen if the Bacon proposal were adopted.

This article was originally published on the Finding Fault website and has been reproduced with kind permission.

The website and blog on divorce law reform is overseen by the research team and will include a range of contributors, from diverse perspectives, putting their views forward.