In Re A-F (Children) (Care Orders: Restrictions on Liberty) [2018] EWHC 138 (Fam) the court gave guidance on when Art 5 of the European Convention on Human Rights (ECHR) is engaged in relation to a child in the care of the local authority, and the procedures necessary to ensure the deprivation of liberty is lawful.

The test cases concerned seven children, aged between 11 and 16. A final care order was made in each case in favour of the same local authority. Each had health difficulties such as autism, severe learning disabilities or global development delay. Each was in foster care or a residential placement. Some were in locked environments, and all were heavily supervised. 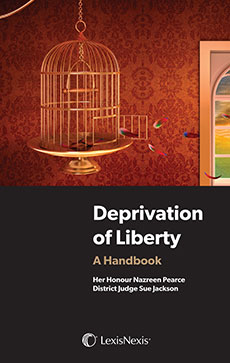 Deprivation of Liberty
Provides professionals at all levels with a...
£57.99
View product

Munby P set out the legal framework in which the issue arose, including:

(a) The objective component of confinement in a particular restricted place for a not negligible length of time;

(b) The subjective component of lack of valid consent; and

(c) The attribution of responsibility to the state.

Munby P held that where a child was subject to a care order, the critical question would be whether there was confinement, ie Storck component (a). If there was, the state would be responsible, and neither the local authority nor a parent could exercise their parental responsibility so as to consent.

He took care at [16] to distinguish between a “deprivation of liberty” within the meaning of Art 5 and a restriction on liberty of movement governed by Art 2 of Protocol 4.

Many aspects of the normal exercise of parental responsibility that interfere with a child’s freedom of movement do not involve a deprivation of liberty engaging Art 5, even if they are a restriction on liberty of movement (Re D (A child) at [95]). Whether particular accommodation is locked or lockable is not determinative of whether there is confinement as described in Storck component (a), (HL v United Kingdom (Application No 45508/99) (2004) 40 EHRR 761 at [92]).

Most eight-year-old children living with their parents at home would be living in circumstances amounting to confinement that satisfy the ‘acid test’, but common sense would plainly indicate that such a child is not, within the meaning of Art 5, deprived of his liberty.

For a child in care, the inquiry would focus more on supervision and control, rather than freedom to leave.

He held that where the placement of a child involves a “confinement” for the purpose of Storck component (a) but is not secure accommodation within the meaning of s 25 of the Children Act 1989, there must be judicial authorisation in order to comply with Art 5 and this can only be provided by the High Court, in the exercise of the inherent jurisdiction or in some circumstances if the child has reached the age of 16, by the Court of Protection [26].

He held (at [43]) that whether a state of affairs which satisfies the ‘acid test’ amounts to a confinement for the purposes of Storck component (a) has to be determined by comparing the restrictions to which the child in question is subject with those that would apply to a child of the same 'age', 'station', 'familial background' and 'relative maturity' who is 'free from disability'.

Although each case had to be determined on its facts, as a rule of thumb, a 10-year-old under constant supervision was unlikely to be being deprived of his liberty, an 11-year-old might be, but the court would more readily conclude that a 12-year-old was.

He dealt with the requirements of an Art 5 compliant process at [45]-[53] which includes that:

This case provides much-needed guidance as to when care arrangements for children in the care of the local authority including in foster care amount of a deprivation of liberty, and steps that must be taken to ensure compliance with Art 5 ECHR.

The President was at pains to state throughout that whether there is a confinement for the purposes of Art 5 will turn on the individual facts of the case, emphasising a child development-based approach.

He gave some useful guidance to the comparative approach required at [38]-[39], citing Re B [2017] EWFC B93, as providing an 'insightful' and 'compelling' analysis of a typical 11-year-old’s life: comparing a child with his peers and distinguishing commonplace restrictions such as limited access to games consoles and being accompanied on journeys in the community, with much more significant restrictions like 24-hour supervision, restricted contact with parents and siblings and use of physical restraints.