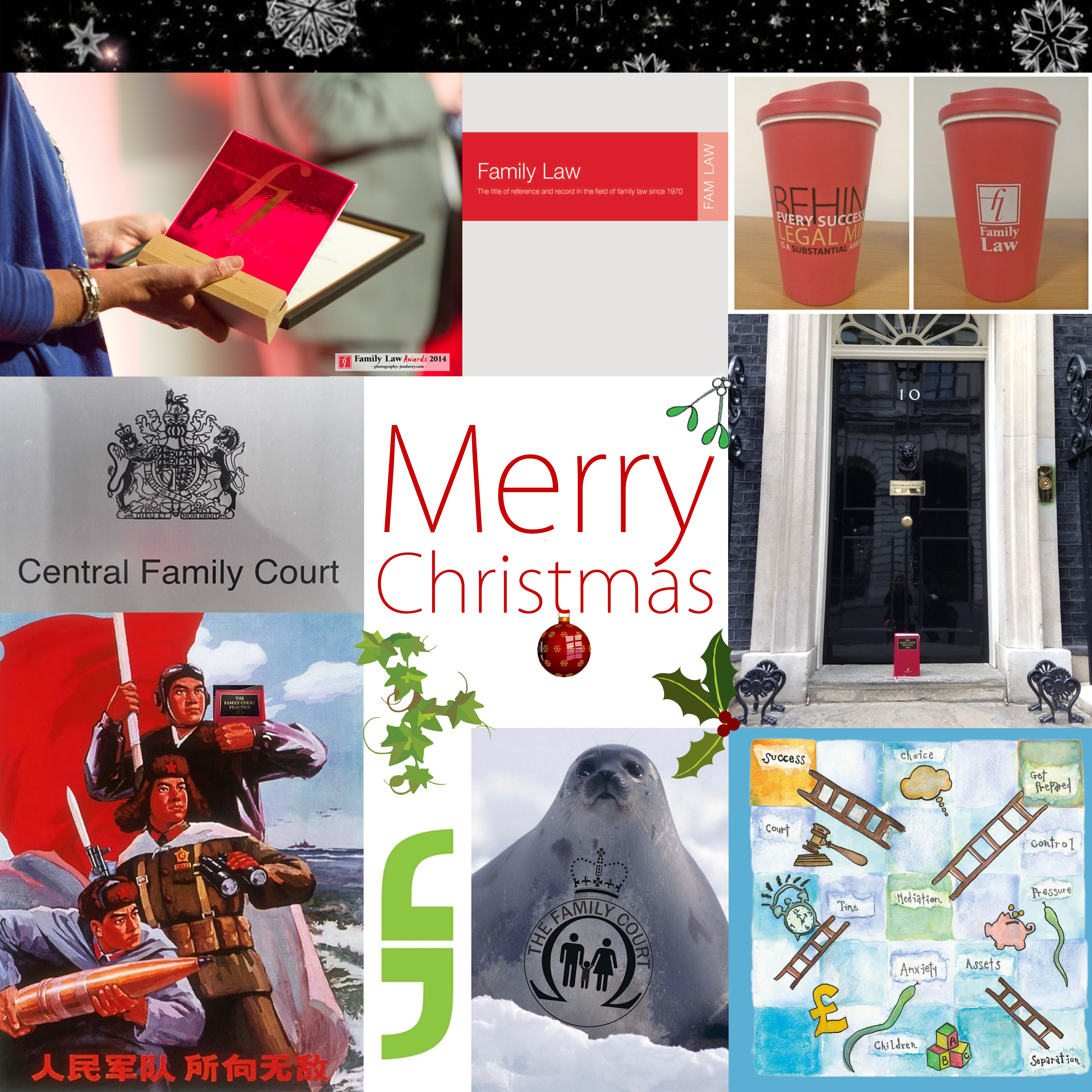 Clockwise from top left: Family Law Awards 2014, Family Law redesign, Family Law coffee mugs, The Red Book – Prime reading material, DIY Divorce, Family Court seal, new Jordans logo, Red Book competition winner – ‘“A people’s army has no rival” – and neither, it seems to us, does the Red Book.’ and the new Central Family Court.
What a year 2014 has been for family law. We have hardly had chance to take it all in, with the tidal wave of reforms in April and thereafter the constant trickle of working group reports, draft standard orders and guidance. With so much happening, Family Law has had a lot to cover. Here is our run-down of the top 10 articles across the year.

The fourth article in our PSL series of essential updates gave family law professionals a neat summary of the need-to-know points regarding the Children and Families Act 2014 in readiness for 22 April 2014. Outlining the changes to both public and private children proceedings, the ways in which the Children Act 1989 was amended, the implications on procedure and the initial must-read sections of the Act; this essential update was our most popular article of 2014.

This article gave the background to the appeals and contained the full judgment of the Supreme Court verdict in the Cheshire West case and was unsurprisingly popular considering the wide reaching ambit and consequences for practitioners dealing with potential deprivation of liberty matters. The appeals concerned the criteria for judging whether the living arrangements made for a mentally incapacitated person amounted to a deprivation of liberty.

In their fourth year, the Family Law Awards had Sir Paul Coleridge at the helm and was a night of celebration, acknowledgment and gratitude for all those directly involved with, and in support of, the profession. Hundreds of people attended The Brewery in the heart of

This article outlined the changes made by the Children and Families Act 2014 to Part 12 of the Family Procedure Rules 2010 and the 26-week requirement for all care, supervision and other Part 4 proceedings. It summarised the amendments made to the PLO and also contained the flowchart, new C110A and the President’s guidance.

7. 13th View from the President's Chambers: The process of reform: an update

The President’s 13th view was a round-up of how the latest reforms have been coming along. It spoke of the reports from The Financial Remedies Working Group and The Children and Vulnerable Witnesses Working Group, and gave encouragement to respond to the Transparency consultation paper. There was discussion of the DNA and hair-strand testing pilot scheme; continued concerns over legal aid and divorce reform. By far our favourite paragraph however, was the final one with which there was simply no arguing with!

8. Presumption of parental involvement to come into force on 22 October 2014

In this article it was revealed that the presumption of parental involvement at section 11 of the Children and Families Act 2014 (which inserted new sections 1(2)A, 1(2)B, 1(6) and 1(7) into the Children Act 1989) was to come into force on 22 October 2014. There was a link to the commencement order and some thoughts on whether the section would serve to make any major changes to child arrangements.

The penultimate essential update discussed the new Family Procedure Rules 2010, Pt 3 and Practice Direction 3A. The requirement to attend a Mediation Information and Assessment Meeting (MIAM) before making an application had been strengthened and given statutory force via the Children and Families Act 2014 and the requirements and exemptions were considered in detail.

This informative piece was produced on 1 April 2014 in anticipation of the re-launch of the Family Court. It gave a sneak preview into the family friendly branding and the ethos of the reforms, making the court process altogether more approachable and less…fishy.
A big thank you to our many readers, authors, contributors, customers and the family law community as a whole – it has been an exciting and busy year and we are grateful for your loyal support.

Wishing everyone a Merry Christmas and a Happy New Year!