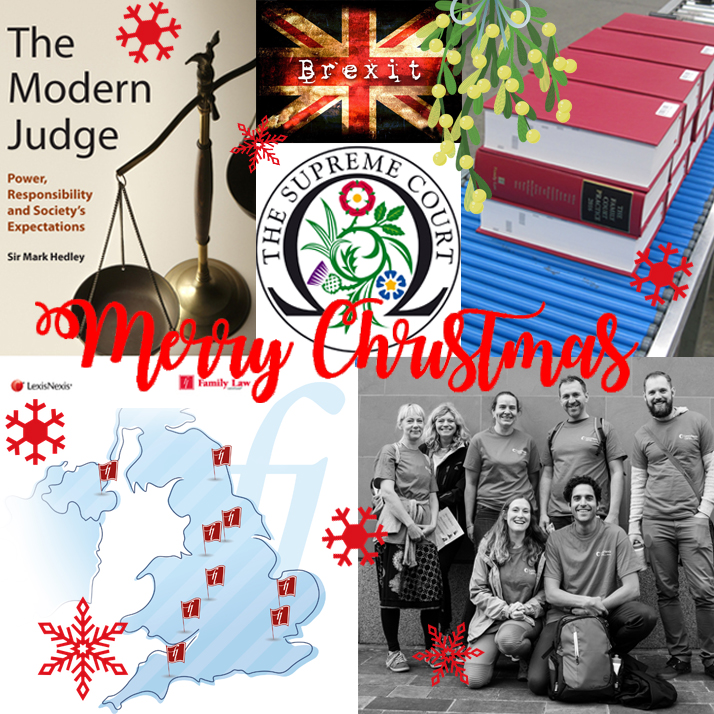 Clockwise from top left: Newly published The Modern Judge (the perfect stocking filler); Brexit and the Supreme Court; Family Court Practice 2016 hot off the press; Family Law does the Bristol Legal Walk and Family Law Update 2017 coming to a venue near you.

Break open the box of mince pies, hang up just a few more strands of tinsel and try to forget that your festive Toblerone will never look the same again. It’s Christmas and that means only one thing here at Family Law…no, not questionable secret Santa presents… we take our seasonal look back over all the happenings of 2016 and our top 10 articles.

The case of WS v WS [2015] EWHC 3941 (Fam) was considered in this article by an expert team of actuaries and financial analysts who considered how the input of a pension expert might have influenced the decision-making process. The judgment in this case was made to offset the value of a defined benefit pension scheme using the Duxbury formula. The decision was made without reference to an expert pension report, the husband's request for one having been refused. The experts discuss this decision and explain why a Duxbury calculation can end up being a severe consequence.

On 1 April 2016 a new CAP order form was released and for a minute there, had everyone’s heads in a complete spin. As usual, Family Law was first to get ahead of the pack and break the story. The order form contained crucial information about styling and should probably be referred back to if you want to ensure you remain at the forehead…I mean forefront.

Back in February 2016 we saw another version of the updated private law orders which had some minor changes and corrections and took into account differences in practice in Wales. These orders were introduced in an effort to simplify their predecessors which had been drafted in conjunction with the Child Arrangements Programme. It was hoped that the templates would be used to keep the forms more manageable and produce a quicker turn around so that parties would be able to leave court with a copy of the order.

As part of their plans to make the justice system more efficient and effective, the Ministry of Justice announced that 86 courts were to close. The particular courts were chosen due to the apparently limited amount of time they were being used for hearings and on the basis that ‘over 97% of citizens will be able to reach their required court within an hour by car.' The news was met with concern given the strain on the justice system to manage the increasing demands and caseloads.

5. Family Law Update 2016
The Family Law Update is the seminal point in the conference calendar and this year took place across nine different cities with an additional free morning session on pension offsetting at select locations. As ever, the Update covered all the important developments in the key practice areas, including the latest on financial remedies, public and private children law, all things procedural, plus a range of need-to-know hot topics. Places for the 2017 Updates are already filling up so make sure you take advantage of the early bird deals and book your space now.

Whatever your views the impact of Brexit has been at the forefront of everyone’s mind since the result of the referendum in June 2016 when 52% of the voting public cast their ballot for the UK to leave the European Union. In this popular article, David Hodson OBE set out his early views on how this decision may impact international family law including the areas of divorce, children issues and marital agreements. Consideration is given to elements we may want to retain and those which will be subject to change.

The President of the Family Division Sir James Munby produced his 15th View in September 2016 and the focus of this edition was the approaching crisis in care cases. The President began by reiterating the rising Cafcass figures and outlining his concerns about how the profession will cope with the predicted future increases. He went on to consider the types of research and analysis required to help understand where resources should go and ways in which the family court can become a problem-solving court.

The Family Justice Council released its guidance on ‘Financial Needs’ on Divorce in July 2016 following the Law Commission consultation regarding Matrimonial Property, Needs and Agreements. The guidance was aimed at courts and legal advisers to clarify the meaning of ‘financial needs’ on divorce and provide a clear statement of the objective that such financial orders should try to achieve, and to encourage consistency of the approach taken by courts across England and Wales. It was hoped the guidance would go some way to addressing the Law Commission’s concerns about regional differences and the lack of transparency in this area of the law.

This Inheritance Act case will be heard in the Supreme Court on 12 December 2016 after three animal charities were granted permission following the Court of Appeal decision. The deceased had left nearly all her estate to the charities but the Court of Appeal found she had acted in an unreasonable, capricious and harsh way and her estranged daughter was awarded monies to buy and house and cover other expenses.

10. Plain English judgment gets the thumbs up and a :-)

Who doesn’t love the odd emoji now and again? A whole host of us were inspired by this public law judgment which came from Mr Justice Peter Jackson and tackled the making of a care order in the most simple of formats. The judgment was warmly received for its 'plain' English’ and the clear way in which it tackled threshold issues and a complicated family history without legal jargon. The judgment was written to allow the children and family members to better understand the court’s reasoning and decision making.

In addition, we have to give a special mention to the Family Law Awards 2016 which was a night of epic proportions celebrating all the excellent work, commitment and achievements demonstrated by the family law community. A perfect warm up to the festive season, over five hundred guests gathered at the Bloomsbury Big Top in London to enjoy the entertainment and congratulate the nominees and winners. A truly magical night was had by all. See all the photos of the night here.

Other stories you liked were:

Family lawyers gather in Parliament to call for No Fault Divorce

150 family lawyers paid a visit to Parliament in November 2016 to meet with MPs and Peers and discuss the issue of ‘No Fault Divorce’. One of the hottest topics of the year, there have been resounding calls across the profession for the introduction of divorce without blame. With the emphasis in family law of non-confrontational resolution to disputes, the no fault divorce seems like a logical next step which many would say should have been introduced long ago.

Without much warning, the family law community were dismayed to learn that the Ministry of justice planned to hike the fee for divorce from £410 to £550. There was understandable dissatisfaction at the fee increase and the somewhat stealthy manner in which it was imposed.

A whole host of these to choose from but October was a popular month with amends to the Family Procedure Rules 2010, a landmark victory for a civil partner, post-Brexit commentary and news on transparency.

From all of us at Family Law, we send best wishes and hope you enjoy the festive season (and a well-earned break). See you in 2017!