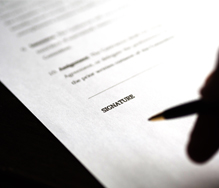 The ex-wife of a McLaren racing driver could be entitled to a £5 million divorce settlement after an appeal court ruled that a 18-year old prenuptial deal was “unfair."

Anita Brack, 51, signed agreements in 2000 with Kenny Brack, 52, a test driver for McLaren, that left her with £500,000 when they separated in 2015. According to The Times, his wealth is estimated at £11.4 million.
Mr Justice Francis told the High Court in 2016 that Mr Brack was “mean spirited” but honest. He suggested that Ms Brack take her case to Sweden, as both are Swedish nationals.

However, an appeal court ruled yesterday that a prenuptial deal was “unfair."

In a response to the ruling, Jay Patel, partner at Lincoln's Inn firm Hunters Solicitors, told LexisNexis that "the Court ultimately retains discretion as to what amounts to a fair settlement."

He added that "this is the reason why considerable care and skill is required in arriving at a figure which not only meets the reasonable financial needs of the financially weaker party but also allows them to receive a fair share of the overall assets."

Bankruptcy and Divorce: A Practical Guide for the Family Lawyer
Explains the impact on ancillary relief of...
£79.99
View product