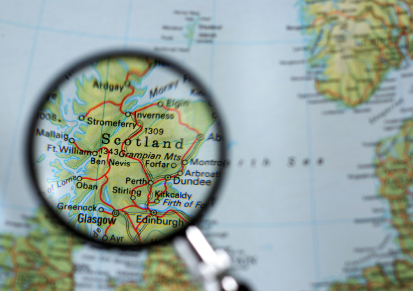 David Hodson OBE MCIArb
Family lawyer
A decision on 23 March 2016 (Re V (European Maintenance Regulation) [2016] EWHC 668) by the English High Court (Mrs Justice Parker) has made public what has been known by international family lawyers for many years: the financial treatment of wives as applicant spouses on divorce is incredibly different between England and Scotland. Particularly, it affects the conventional 'stay at home' wives who have sacrificed careers and their own work to support their spouse and the family household.

In England, such a spouse would anticipate spousal maintenance for life, or at least until retirement when a pension share would be received and at a generous standard. In Scotland, the spousal maintenance lasts a couple of years after the divorce at most. It has anecdotally led to considerable tactics and manoeuvring for Anglo-Scottish families living between England and Scotland. Although there is a UK law setting out mandatory provisions on where proceedings in the UK should occur, there are inevitably ways around it. It was alleged such manoeuvrings had occurred in this case.

This is only a brief overview of Re V. It covers a few features from the judgment. Paragraph numbers refer to the judgment itself. The husband acted in person and it may be that other elements and uncertainties in the law could have been explored in the judgment if these had been presented.

The EU Maintenance Regulation within the UK

This EU law deals with automatic recognition and enforcement of maintenance court orders around the EU. Maintenance is widely interpreted to mean needs, although classically includes spousal maintenance sometimes known as alimony. The EU law also incorporated provisions when more than one country could deal with proceedings because of international connections of a family. It is essentially who is the first to lodge the proceedings, known as lis pendens. This has been heavily criticised by many lawyers as being contrary to good practice, attempts to resolve matters through mediation and negotiation and encouraging a race to court and tactical litigation. But the EU likes this law.

However, the EU Maintenance Regulation specifically operates between England and Scotland and the other counties in the UK almost as if they were separate member states (paras [35]-[38] of the judgment, albeit paras [36] and [37] seem to have gone walkabout and do not appear in the published Bailii version). So, between England and Scotland, it is important to work out where the maintenance proceedings were first lodged (para [42]), even if tactical and without a closer connection, because this is where maintenance (needs) will be decided.

Moreover, the EU is perfectly happy with one set of proceedings regarding a family occurring in one country and another set in another country (para [43]). So, by EU law, divorce proceedings may be in one country and maintenance (claims for needs) can be in another country. To many English observers this seems very strange, and likely to increase costs significantly and decrease the prospects of an overall settlement of all disputes concerning separating families.

So, in this particular case, although there was a divorce issued first in England, the question was whether the maintenance claims should be in England or Scotland. This required a detailed analysis of the procedure in each country with several expert opinions from specialist Scottish lawyers.

Despite being part of one UK, the family law of England and Scotland is very different indeed. Scottish law has more similarities with French law and, indeed, there are close historic connections. Similarities between English and Scottish family law is more likely because of worldwide trends than through being part of a United Kingdom.

This is found in a number of quite significant differences. Perhaps one of the most stark is spousal maintenance, sometimes known as alimony (see para [8]). In England, in a suitable case, it may well be for joint lives or, increasingly, when a pension share takes effect on retirement age. This may, therefore, be many years. Spousal maintenance can also be quite generous, perhaps based on the standard of living of the marriage if that is sustainable. In Scotland, spousal maintenance is normally limited to 3 years post-divorce. There is a far greater expectation that the woman, as invariably the applicant and the financially weaker party, will go back into the workplace quickly after the divorce, irrespective of child responsibilities and irrespective of inability to return to premarital levels of earnings ad the lack of recent workplace experience.

Moreover, Scottish law does not take into account interests under a will or potential benefits under a discretionary trust (para [8]). England will treat such interests as resources available for distribution for a fair settlement.

There are other differences significantly affecting the financial outcomes on divorce in a case with identical circumstances decided north or south of the border.


Article continues below...
Although a cross-border UK law sets out where the divorce proceedings should occur when there are intra-UK connections. actions taken by one spouse preliminary to proceedings can influence the outcome. Anecdotally, some high-earning husbands have moved families to Scotland to minimise divorce settlements. Also anecdotally, some wives based in Scotland have moved on separation to England to establish sufficient connection to bring proceedings here. This is where advice from specialist international family lawyers is vitally needed. It can make a significant difference.

In my experience, one party engaging in tactical behaviour to increase or reduce a settlement, particularly at a time when the other spouse was either unaware of the marital difficulties or of the true reason for particular behaviour, may produce a far more favourable financial settlement for that party. Nevertheless, and crucially, often it significantly increases the litigation because of the anger and distrust created by those tactics and behaviour, the costs of the dispute, longer-term issues for any future co-parenting and far greater difficulties in attempting a negotiated outcome. A good part of the blame lies with the EU law which encourages one party to engage in potentially deceitful tactical behaviour and then to race to court to get the more favourable outcome in their preferred country. Replacing this with a law based on the closer connection of the family with a particular country is much needed - but won't happen.

After the fiasco when it was discovered the MOJ financial disclosure document on its website produced the wrong outcome, showing liabilities as assets, this case highlights another error (para [32] of the judgment). When the EU Maintenance Regulation was introduced in 2011, the grounds of jurisdiction (connectedness with the courts of a country) of maintenance claims was changed to bring English law into line with EU law. Unfortunately, the MOJ did not update its website either then or until July 2015 when this case was heard. The husband, acting in person, had understandably relied on what was said about jurisdiction on the MOJ's website until he got to court for the final hearing, when it was explained that what was on the website was wrong, and at 2.00 pm on the first day he abandoned his case in respect of the wife's alleged inadequate jurisdiction.

This really was an inexcusable error by the MOJ. But how inexcusable?

First, the English law from 2011 in respect of jurisdiction for these maintenance claims is obscurely drafted. It cross-refers to a statutory instrument of 2011 which itself is very dense and certainly not clear. Similar changes were made to s 15 of the MPFA 1984 in respect of financial claims after a foreign divorce. New s 15(1A) defies any coherent attempt to analyse what it means. This is certainly not drafted to help the general public. It took me many months, probably more than a year, after it was introduced to work out what it really meant in practice. There were differences of opinion between specialist QCs and solicitors. This is not the way, in the early 21st century, that legislation should be introduced.

Secondly, the MOJ themselves did not publicise in advance the introduction of the new EU law what were some of the significant changes. They say they consulted with stakeholders, but it's very hard to find anyone willing to admit they were a stakeholder who was consulted and, in any event, who they consulted did not inform the profession or the public. It was almost 12 months after the introduction of the new law that there became awareness amongst European family law specialists of the intention of some of the jurisdictional elements of the new EU law. If we were struggling to understand the new EU law, those drafting the MOJ website were equally struggling.

But these factors apart, it really is inexcusable. Either the MOJ should have a website which explains the law as simply as possible and completely up-to-date, or have no website at all. Out-of-date or simply wrong information is inexcusable. Litigants in person are entitled to a better service.

Ultimately on my analysis of the judgment, it came down to whether the Scottish petition issued by the husband incorporated maintenance claims. Expert advice was needed. The judge found it didn't in the particular form presented to the Scottish court, and therefore the English proceedings were first in time and maintenance should go ahead in England.

It should, of course, be observed that this was a couple who married in 1994 and moved to Scotland in 1995, where they lived throughout their married life including with their now-adult daughter until separation in August 2012 when the wife left the matrimonial home and, she said, moved to stay with family in Oxfordshire, issuing a divorce in England exactly 12 months later on the basis of 12 months' habitual residence. The husband remained in Scotland where his income, against which spousal maintenance would presumably be claimed, arose. On any basis, a Scottish marriage and a Scottish family and, many would say, a Scottish case. But, because of the EU law which allows a party to secure proceedings through commencing proceedings first, England will deal with the maintenance claims. Almost certainly, the wife will have significantly more maintenance than in Scotland.

There was no power for the court to stop its own proceedings (technically known as a stay), so that they can go ahead in the country where there is the closest connection (paras [44]-[53]).

Although Scottish specialists are better able to comment, my reading of the judgment is that, if particular maintenance claims had been included in the Scottish divorce papers by the husband, then Scotland would have been first and the maintenance dealt with in Scotland.

Accordingly, one crucial message from this case is that, in any family law case involving any EU member country, it is essential to bring specific maintenance claims in court papers before the court at the very earliest opportunity. Do  not first attempt to negotiate, to mediate, perhaps even to discuss reconciliation. Race to court to secure the best outcome. Yes, this is a pretty rotten law, but until the EU changes it (and they have shown no inclination to do so over the past 16 years) or the UK is no longer subject to EU law, families within Europe have to conduct their affairs on relationship breakdown in accordance with this law.
This article was originally published on David Hodson's website and has been reproduced here with kind permission.
Categories:
Articles