Increase in cross-border cases, according to Lord Justice Thorpe 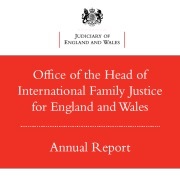 The number of cross-border family legal disputes have grown by tenfold in a decade and more than doubled in two years, according to the annual report of the Office of the Head of International Family Justice.

The report documents the growing body of international law and agreements needed to resolve these cases.

Lord Justice Thorpe's office functions as a centre of expertise and a help desk for judges and lawyers at home and abroad who have seen their cases stalled and delayed because two countries' legal systems are involved and when international conventions guaranteeing children's rights, are being flouted by overseas courts.

In a list of anonymised case studies the report cites a mother who had taken her children to France to prevent them from being taken into care, where they were found living on a waterlogged caravan site, due to close for the winter, and were not attending school.

In another case the Office obtained the personal assurances of the Cypriot Attorney General that a woman agreeing to return from Britain to Cyprus with her child would not be prosecuted by the Cypriot authorities.

The report provides a unique insight into the area of international family law as there are no published figures for the growth in international litigation overall.

Link to http://www.familylawiclip.co.uk/articles/april-2013-blog-post for the latest update from the Office of the Head of International Family Law Justice and to read the Report in full.