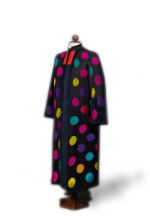 In order to create a child friendly atmosphere in court, the Lord Chief Justice of England and Wales and the Family Rules Committee have issued a new Practice Direction which will introduce the wearing of new judicial robes in family law proceedings from today.

The Lord Chief Justice has conducted extensive research including sessions where senior members of the judiciary sat with pupils in primary schools across the country to get their feedback and suggestions. After obtaining the results of these sessions, the Lord Chief Justice appointed the renowned designer Cath Kidson to design the robes.

The designer was picked because of her successful range of homeware, clothing and accessories featuring textured floral prints and brightly coloured designs that appeal to children.

A senior judge couldn't contain his excitement about the new robes: "Although I was initially unsure, I have grown to love the new polka dot robes. They immediately let court users know that I am a friend who they can talk to freely instead of thinking I'm someone who will judge them.

"I'm also really looking forward to sitting on bean bags in a circle instead of sitting up at the bench on my own. It can get quite lonely up there."