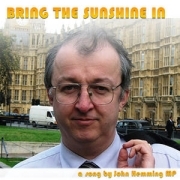 John Hemming, a Birmingham Lib Dem MP who chairs the organisation "Justice for Families" is releasing a charity song called "Bring the Sunshine in" to to raise awareness for his Justice For Families Campaign Group.

However, last week the MP was severely criticised by Lord Justice Wall for his conduct while acting as a McKenzie Friend in a Court of Appeal case for a woman whose child was taken into care. Nottingham County Council took the child into care shortly after the woman gave birth prematurely at 27 weeks.

In his judgment, Lord Justice Walls said: "As to Mr Hemming, my judgment is that his self-imposed role as a critic of the family justice system is gravely damaged.

"Speaking for myself I will not be persuaded to take seriously any criticism made by him in the future unless it is corroborated by reliable, independent evidence".

Mr Hemming made allegations that solicitor's files had been tampered with and that the expert witness was biased.

"Mr Hemming has been willing to scatter unfounded allegations of professional impropriety and malpractice without any evidence to support them," Lord Justice Wall said.

The Court of Appeal ruled that that the local authority was right to take the girl into care.

Mr Hemming said his song, released today and available on the music website emusic, "calls for more openness in the Family Courts." He said: "Britain has a network of secret courts that lock up mothers, fathers and grandparents for heinous crimes like talking to their children or grandchildren. These secret courts make lots of money for lawyers and expert witnesses, but the general public is not allowed to know what goes on."

The money raised from the song will go to the Angela Cannings Foundation.

In the chorus of the song the MP sings:
"Lets bring the sunshine in
lets end this awful sin
mums and dads are being convicted
because the truth has been evicted"

The song uses examples from real cases including the Sally Clark trial about which the MP sings:
"Poor Sally's children died
in court the doctors lied"

In last week's Court of Appeal judgement, Lord Justice Wall criticised the MP's public "wrong and ill-informed" comments as "an abuse of his position".

In response to the judgment, Mr Hemming said: "I am mystified by much of the comments in the judgment relating to myself. It appears that I did not explain my arguments sufficiently clearly in respect of the issue of 'apparent bias'."