The Family Court Practice 2018: An introduction

Find out more or request a free 1-week trial of The Family Court Practice. Please quote: 100482.There is, as yet, no light at the end of the Brexit tunnel. All that is certain is that there is no certainty, and a raft of domestic legislation is either treading water or has been abandoned. Family lawyers will be particularly anxious to establish what, if any, reciprocity will survive the final exit, hard or soft, in March next year – in terms of enforcement of judgments and recognition of child arrangement orders among others. There is already a sense that family law will take second place, if not worse, to discussions about a single market, customs unions and freedom of movement, while the sovereignty soundbites from Government and the opposition alike suggest a wholesale and troubling lack of awareness of the benefits, and indeed the need for, a recognisable and unifying code of practice and legislation, currently provided by the European Court. All we have, currently, is a foreword from the Prime Minister to the white paper (the European Union (Withdrawal) Bill) asserting that ‘the same rules and laws will apply on the day after exit as on the day before’. And what of the day after and the day after that? Presumably, an accelerating drift away from the EU accompanied by divergence rather than stagnation.
The lack of domestic legislative activity is particularly acute in child support and marriage law, and indeed divorce. The Law Commission responded in 2015 to the Government’s request for a review of how people can marry in England and Wales, describing the current law as ‘outdated, uncertain and needlessly complex’. Two years later, however, the explanation for continued silence on the issue is that the family justice system ‘is under significant pressure at present from a sustained increase in public and private law cases’, which the Government is trying to alleviate.

‘Accordingly, we need to focus on reforms in this area of the system in order to meet the unprecedented increases in demand. Any opportunities for primary legislation will need to support that aim.’

This in a letter from the then Justice Minister, Dominic Raab MP, who held that office for just 4 months, which might not have afforded him the greatest length of time in which to reflect on the issue; but it is perhaps unfair to suggest a lack of adequate scrutiny when, over a period of 6 years, no less than six Lord Chancellors have come and gone. However, the suggestion that there is any current or foreseeable attempt to alleviate the pressure on the Family Court is surprising, given that the opportunities either do not exist or will not be sought. This in the face of repeated alerts (from no less than the President) that the care system is experiencing continued, increasing and unsustainable strain.

And likewise the (invariably unhappy) ending of marriage. Notwithstanding the assumptions which informed opinion as the Divorce Reform Bill of 1969 was debated – some correct, but others (notably the ‘Casanova’s Charter’) significantly wide of the mark – the concept of ‘no fault divorce’ remains something of an illusion. The ‘ground’ of irretrievable breakdown still requires fault to be found in three of the five statutory provisions. In 1969, the ‘special procedure’, let alone digital dissolution, did not exist. Commentators would perhaps have been astonished at the apparent ease with which the main suit is now disposed of. However, if blame is to be avoided as a basis for dissolution, the parties must remain apart for 2 years to achieve a divorce by consent, or 5 years if agreement is impossible.

Although there has been a welcome extension to the definition of domestic abuse, the Government appears disinclined to find time to turn its attention to the law of divorce – indeed each of the last reforms have been commenced by Private Members’ Bills – conscious no doubt of the time needed to resolve the conflicting arguments. Too easy an escape from the responsibility of marriage and access to financial distribution might signal a State-sponsored message that marriage and partnerships are treated lightly; too difficult, and formalisation of relationships by civil partnership or marriage will be replaced by casual cohabitation. The focus should be, it is suggested, on the welfare of children rather than the personal happiness of the adults, but the damage to a child’s emotional and educational future arising out of adult serial cohabitation seems to be an unlikely consideration, given the repeal of the Matrimonial Causes Act 1973, s 41. Nonetheless, the financial support of children who remain in the care of an abandoned parent remains an imperative, and whether or not the law of divorce is to receive attention, Parliament must take heed of the wholly inadequate provision relating to child maintenance. Judicial criticism has already been aimed at, for example, the manner in which asset-rich liable relatives can thumb their noses at their obligations. If it is the case that a society is measured by the manner in which it treats its most vulnerable members, then the Child Maintenance Service would be a poor example on which to draw.

But how much more the provision of mental health services both for adults and more particularly for children? The UK is among the wealthiest nations on the planet, remarked the President in August 2017, and yet he felt driven to draw attention to the ‘disgraceful and utterly shaming lack of proper provision in this country of the clinical, residential and other support services [for young people]’. Ultimately, following the publicity engendered by his alert that the alternative would leave ‘blood on our hands’, a facility was found for the young woman in the case of Re X (A Child)  (No. 3) [2017] EWHC 2036 (Fam), [2018] 1 FLR 1054 but it will come as no surprise that in March this year the same ‘profoundly depressing’ scenario was played out once more before Mr Justice Hayden when once again a young and vulnerable person, who remained a risk to herself, her carers, other young people and the public in general found herself in a ‘parlous situation’ where there remained ‘wholly inadequate’ provision for her care. In the same month, the Care Quality Commission reported that mental health care for children is at a crisis point in Are we listening? A review of children and young people’s mental health services.

But while honourable members argue among themselves, the President has again not been idle. At last, and no doubt as a result of his tireless effort to address the issue of vulnerable witnesses, we now have Pt 3A added to FPR 2010. The Court is required to identify, and address the difficulties faced by, vulnerable witnesses to ensure they can give the best possible evidence to the Court with the minimum of distress. In this area (for example ‘ground rules hearings’), the Family Court is some distance behind the criminal courts, but the lengthy practice guidance which is now provided (and found in this edition) should be read and digested and will be of significant assistance to practitioners and judges alike. Hopefully, the Procedural Guide which is also found in this work will serve not only as a useful introduction, but as an aide memoire for subscribers both new to, and well versed in, family procedure. Given that the Legal Aid Agency has successfully resisted calls to fund intermediaries, it is perhaps unfortunate that there is as yet no certainty of provision by HMCTS (the internal guidance is couched in guarded terms), although one can, it is assumed, take some comfort in the disclosure (in July 2017) that the substantial increase in Court fees helped the Court service to record a surplus of £102m in the previous financial year.

And in November 2017, the President was able to announce the setting up of financial remedy ‘hubs’, served by appropriately qualified judiciary, providing a robust and specialist service upon which user and practitioner can rely for both expertise and predictability of outcome. A note of caution: it is already possible to issue an application in a Court of one’s choosing, and the requirement to travel elsewhere and possibly some distance might not be universally welcomed. Of perhaps greater importance is the need to ensure that the current recognised expertise and experience of the District Bench is not allowed to wither away by a reluctance of the hub to release cases to hearing centres. The new procedure (although as yet without the detail, for example, of the new forms, which will have been published by the time of the Supplement to this work in the latter part of this year) is discussed, as far as it can be, in this edition. 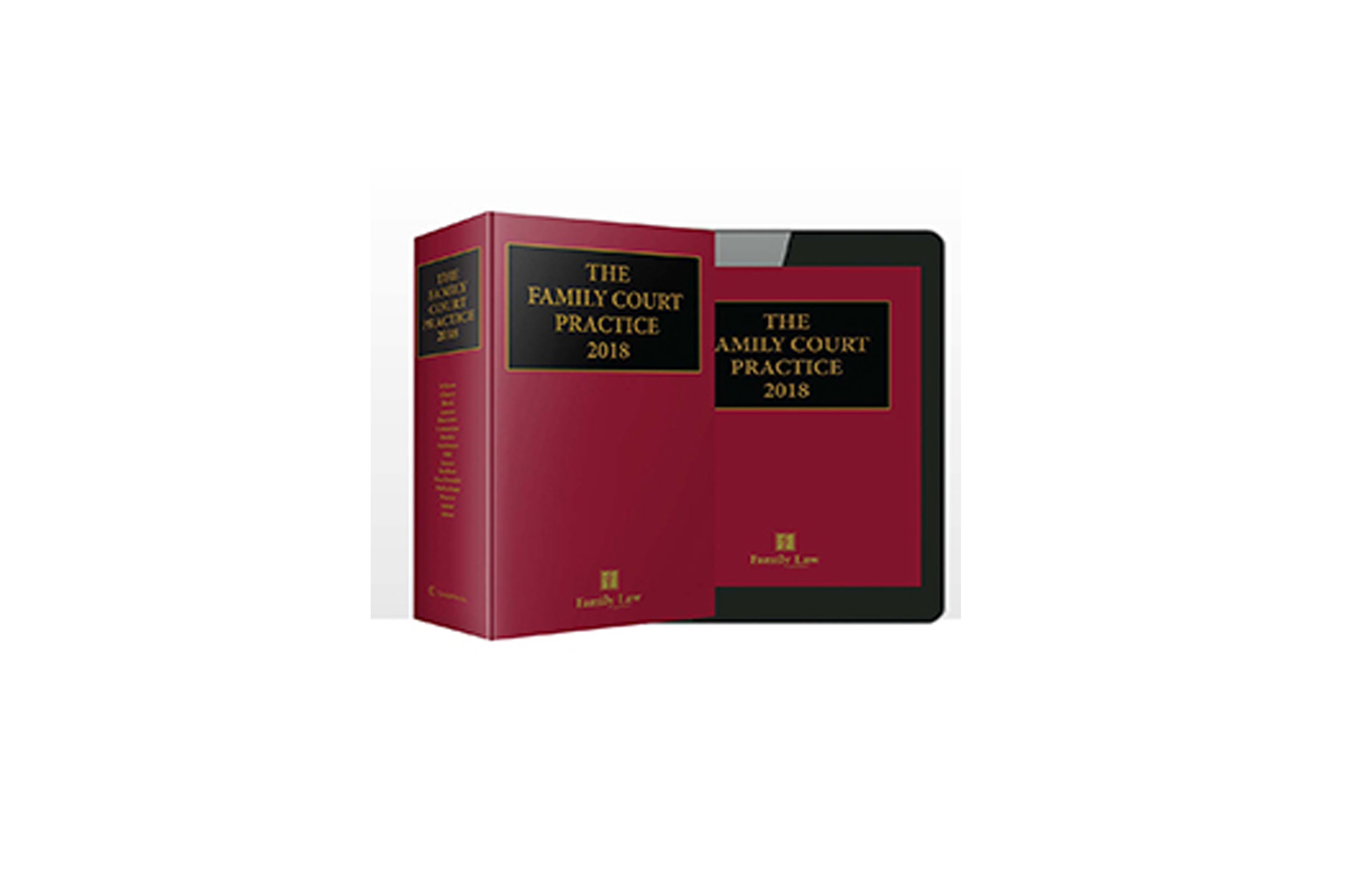